How to Climb Mt. Iraya

If you're fortunate enough to make it to Batan Island, you might find yourself gazing at Mt Iraya and wondering how to climb it. Sadly there are no maps, and conflicting directions on how to accomplish this. This post explains how to get to the top.
Posted in Adventures & Travel
May 4, 2019 | 0

At 3300ft (1000+m) above sea level, Mt.Iraya is an imposing, recently-active volcano, that is sadly shrouded in cloud most of the time from the moist sea air. We visited in late-April, and despite never seeing the summit all week, we still thought that it would be fun to climb it.

DENR requires hikers to get a permit to climb the mountain. The DENR office is at Bersona and Mabini streets at the north end of town. They were very welcoming, and it took just 15mins for them to write up all the paperwork for our permit. Their main ask was for us not to leave our litter on the mountain.

The DENR will also put you in touch with a guide. There seems to be a set, co-ordinated rate of P1500/guide. The guide we were put in touch with spoke little English, wouldn’t budge on price and insisted we needed 2 guides for our party of 5. Feeling stubborn we decided that it’d just be more fun to do it ourselves.

We couldn’t find any maps identifying the trail, but blogs from a few other people gave us the necessary clues to piece things together.

The trail starts at the north end of the runway. Most of the trike drivers will know where to bring you, but if they don’t, follow the road north of the runway all the way to where it dead-ends at a small concrete bridge. The trail you want is the one on the left just after you cross the bridge. 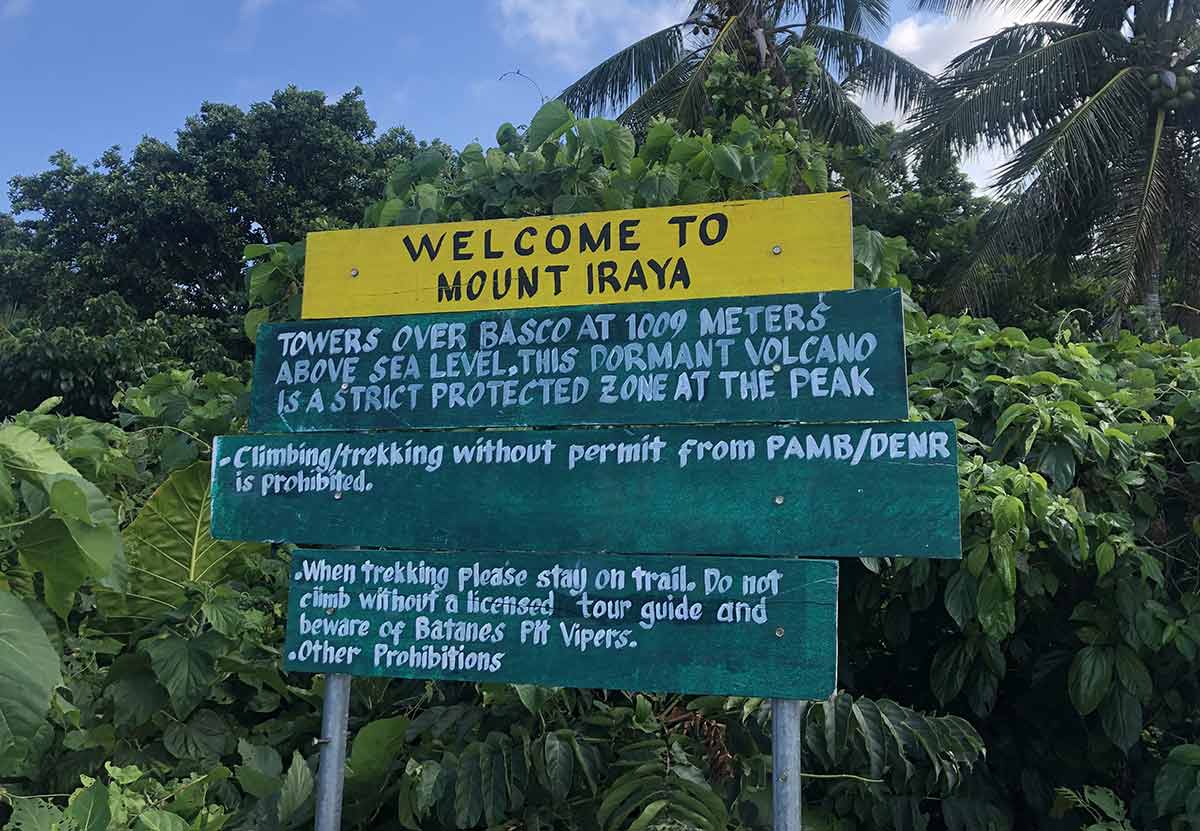 The trail weaves along the forested gulch for the first 15 minutes or so. If you hire a guide, this is where they’ll be earning their money, as numerous paths branch off to nearby fields. Eventually you need to take one of these turn-offs, but it’s not easy to figure out which one. There are no signposts, and I doubt there will be any soon. 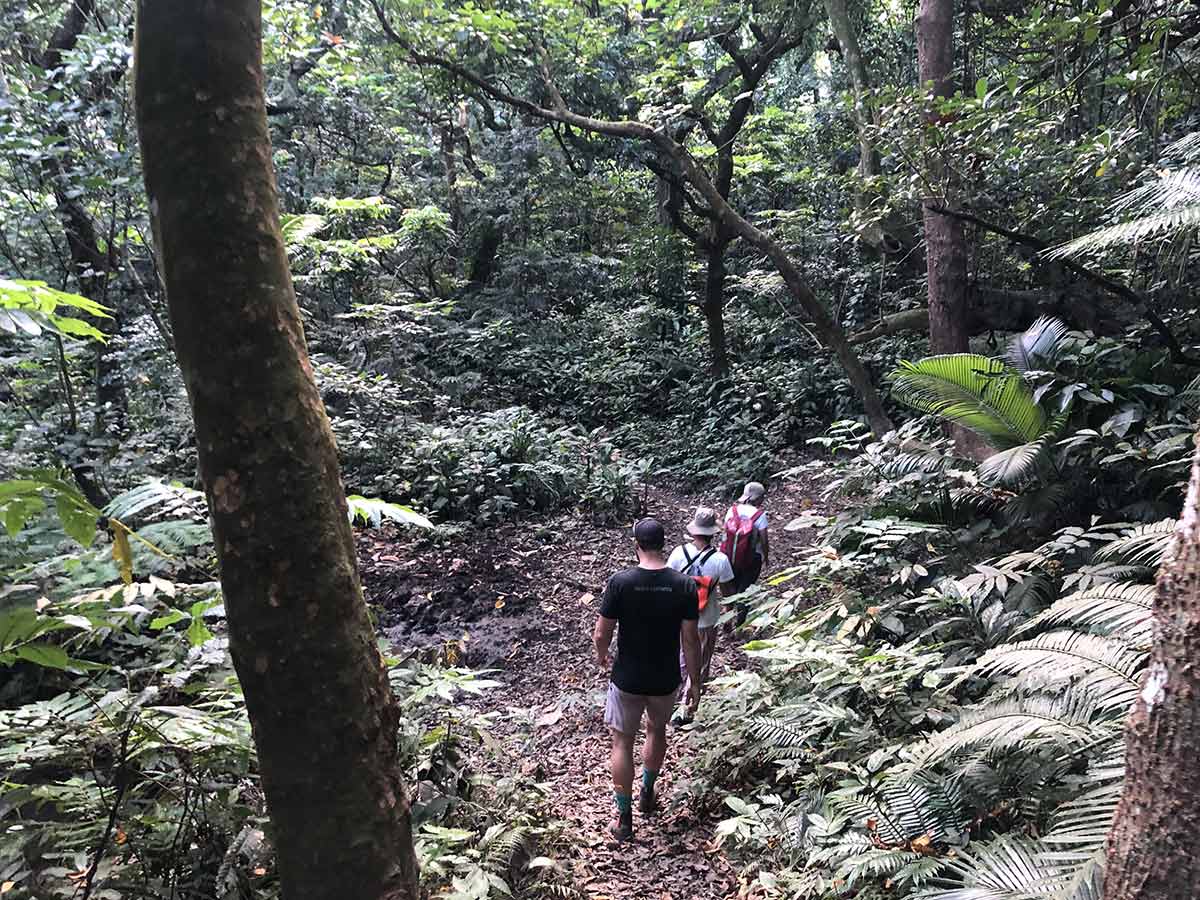 The turn-off you’re looking for….

The turn-off you’re looking for is not long after you cross through an open field. Look for a branch to the left, it’ll lead down and along the riverbed, and then left again and up a field on the hillside. (The blue line on the map below). Continue up to the top of the second field where you’ll then see the main path up the hill. The path entrance is through the bushes and is not at all obvious until you’re right at the tree line.

If you stay in the gulley too long you’ll end up in a dead-end like we did (The red line was our attempt to blaze a trail). But, know that the trail is up there, even though you might have to do some bushwhacking to find it. We backtracked to a large field on a hill, climbed that… then hacked through the bushes for 15mins before we got lucky and stumbled onto the trail.

The key point is you want to ascend the ridge to the left of the gulley.

Once you’re on the main path up the hill, it’s a fairly clearly defined track all the way to the top, but that’s not to say it’s easy. It’s not. Other blogs you might find describe the route as ‘steep and strenuous’, and they’re accurate. They talk about an ‘assault’ up the mountain, but by the time we reached the top, it felt more like I was the one who had been assaulted.

But initially, the hike up through the forest is quite pleasant. There are birds calling, there’s lush vegetation, it’s shaded from the sun, and a couple breaks in the canopy make for good views. 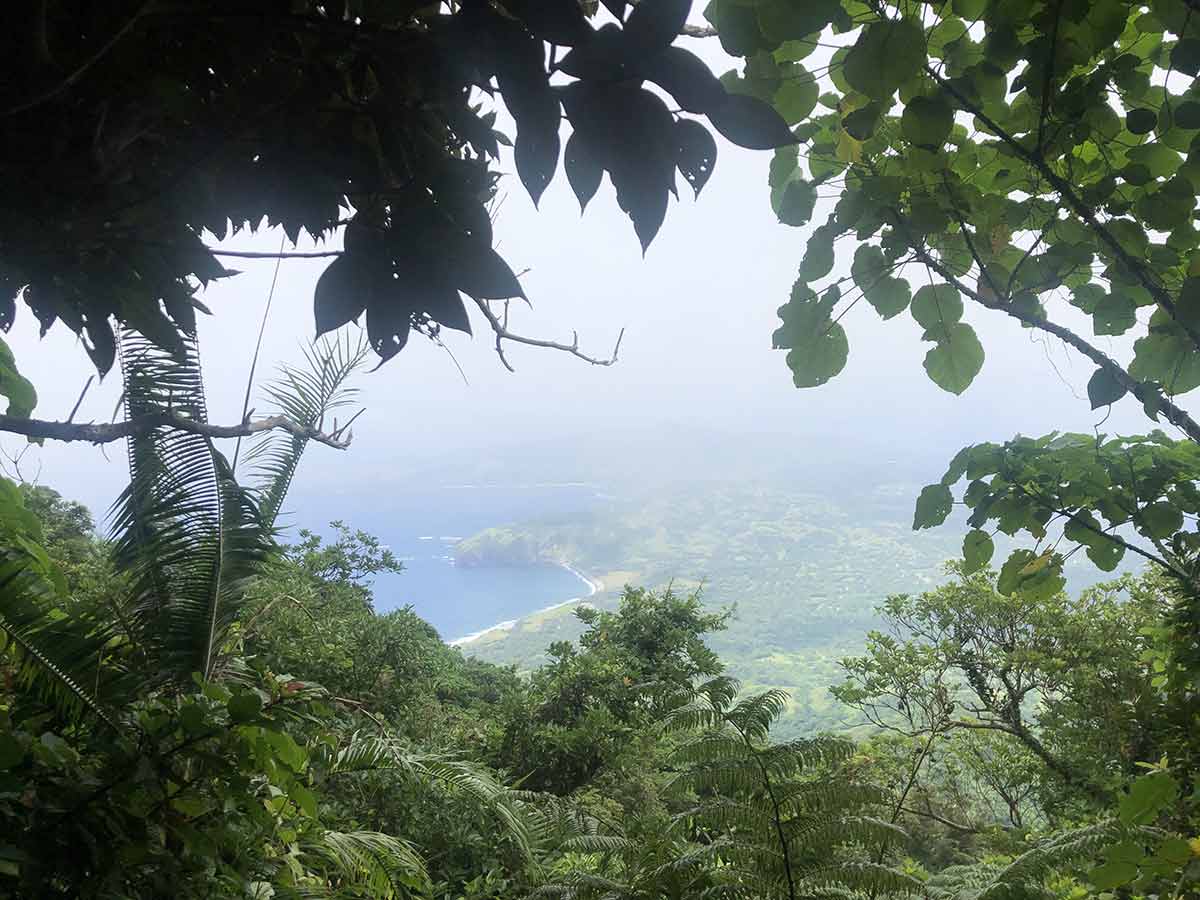 As you gain altitude, the path becomes steeper and then quite muddy as you reach the moisture soaked cloud-line. By about 2500ft the forest gives way to thick zebra grass and it becomes a very steep, very muddy climb to the top with lots of opportunities to slip. You’ll want good shoes, and maybe even gloves.

The reward is an indistinct summit shrouded in fog. A couple concrete crosses mark your arrival at the crater rim, although the true summit can be found a little further along. If you walk down this path, be very careful as there are a couple deep pits right to the side of the trail that you could easily fall into. They looked deep, very deep, and you wouldn’t be climbing out of them.

As we reached the end of the path, the clouds gave way to give us a glimpse of the crater, but it didn’t last for more than 15 seconds. If it’s cloudy when you arrive, you should hang around and have lunch, because you never know when the sun might break through.

Your other reward for reaching the summit, is a slippery, tricky, down-climb. Be prepared to fall on your ass several times. Without the zebra grass to hold on to, you’d probably need ropes. You’ll definitely be washing your clothes by the time you’re finished.

We started our hike at 7:30am and were done by 3… including probably 45 minutes for getting lost at the beginning. I wouldn’t say this was a fun hike, but it’ll definitely create some memories for you to remember. Share your experiences in the comments below.

Oh, and keep your eyes open for snakes, and carry a stick to knock away the spider webs!

Fall in California is one of the nicest times of year to visit the Channel Islands. The strong northwest winds abate, and a sailboat helps you get to places that are a long way from civilization.